Among the different events, IASEM focuses on implementing activities in higher education, in order to offer insights and useful interpretive tools to young people and future leaders who want to work in the Mediterranean area and want to understand the cultural, geo-political and economic background where to operate. 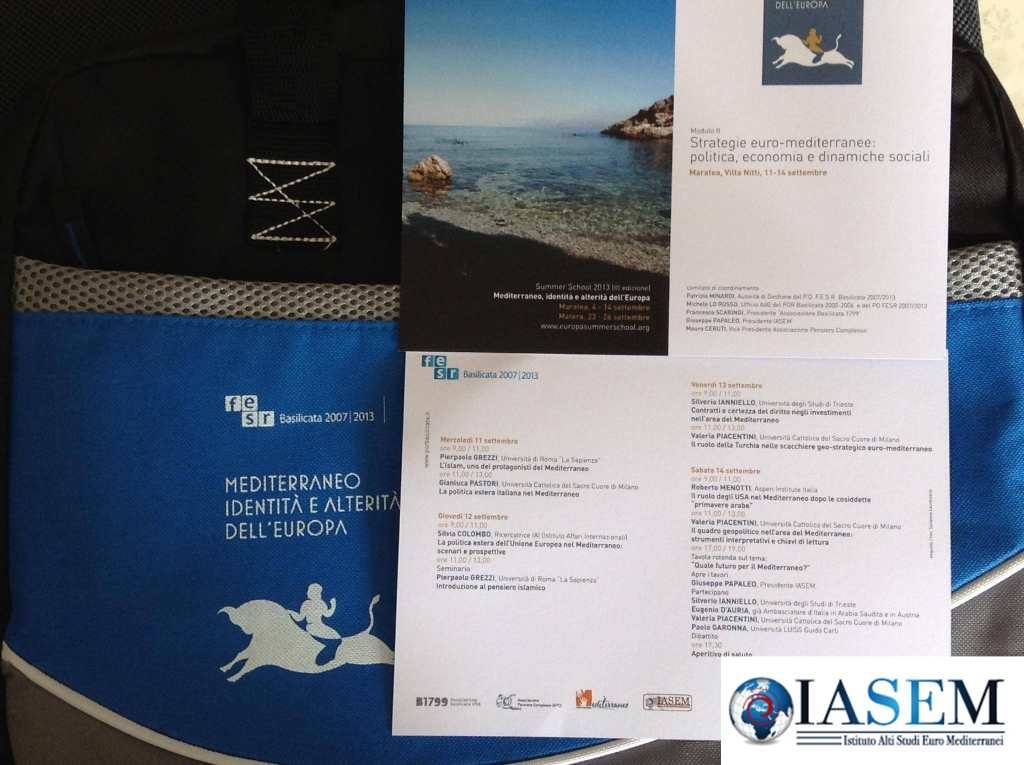 The Summer School 5th edition had as its main topic “Euro-Mediterranean Strategies – Politics, Economy and Social Dynamics”. The intensive 4 days training course deepened many important matters for the Mediterranean area, showing the hugest criticism and opportunities which characterize geopolitics and economy. Essential matters as the social ferments of Erdogan’s Turkey, the development of the Syrian conflict and its consequences, the democratic requests emerged during the so called “Arab springs” and not yet defined, the geo-economic role played by GCC, as well as the role covered by european Countries in the Mediterranean scenario, make the Mediterranean the place of complexities and, at the same time, the stage of great opportunities in the economic and political field as well.
These topics had been faced thanks to the participation of Prof. Valeria Piacentini ( Professor Emeritus of History and Institutions of Muslim world at University Cattolica of Sacred Hearth of Milan), Dr. Roberto Menotti (Director of Aspen Online and Vice-Director of Aspen – Spen Institute Italy), H.E. the Ambassador Eugenio d’Auria (former Ambassador of Italy to Saudi Arabia), Prof. Gianluca Pastori (History of International Relations at University Cattolica of Sacred Hearth of Milan), Dr. Silvia Colombo (Researcher at IAI-International Affairs Institute), Prof. Silverio Ianniello (Professor of Economy of Financial and Monetary Markets at University of Trieste; Vice-President of IPALMO), Dr. Pierpaolo Grezzi (Scientific Coordinator of iASEM-Institute of High Euro Mediterranean studies). 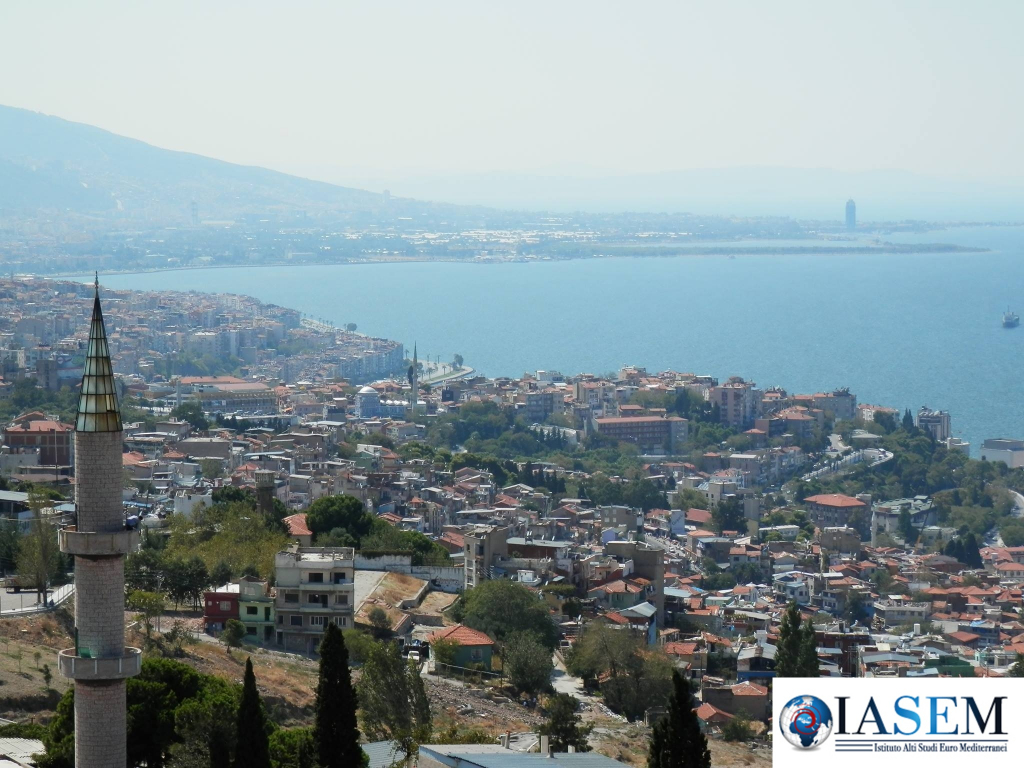 The 4th edition of IASEM Summer School was held at Yasar University campus in Izmir on the topic “Towards a Mediterranean integrated market: strategies and analysis”. The one week training course counted on an international participation with students from Turkey, Syria, United Kingdom, Tunisia, Azerbaijan, Turkmenistan, Italy, Nigeria.
The Summer School was an opportunity of meeting and studies, deepening the most relevant issues of Mediterranean modernity. In particular have been treated the following topics: The role of United Nations in the Euro Mediterranean area (H.E. Ambassador Rt. Ertugrul Apakan); Political, strategic and Economic Dynamics in the Euro-Med (Prof. Aylin Guney – Yasar University); Mediterranean Institutions in a historical perspective (Prof. Valeria Piacentini – Catholic University of Milan); Mediterranean Trade: trends and opportunities. Special focus on Turkish-Italian Relationships (Igor Di Bernardini – Italian Consulate, Izmir – and Rebii Akdurak – President of Italian Chamber of Commerce, Izmir); Religions and Economy in the Mediterranean Area: History and Perspectives (Dr. Salvatore Drago– University of Messina); The Role of Women in Euro-Med Zone from Socio-Economic Perspective (Asst. Prof. Meltem INCE); Externalization of Migration Policies in the EU and Mediterranean (Dr. Ayselin Yildiz- Yasar University); Energy Geopolitics of the Eastern Mediterranean (Asst. Prof. Dr. Emre Iseri-Yasar University); Securitization of Migration Policies in Southern Europe (Dr. Gokay Ozerim-Yasar University); Political Economy of the Arab Middle East and Energy (Asst. Prof. Dr. Emre Iseri- Yasar university); Euro-Med strategies and the promotion of democracy (Assoc. Prof. Aslihan Celenk-Erciyes University).
During the Summer School also a visti to NATO base in Izmir was attended, during which were treated some topics connected to the Security in the Mediterranean.
Download Brochure

In the marvelous setting of “The White CIty” and in partnership with Konrad Adenauer Stiftung was held the 3rd edition of IASEM Summer School on the issue “The Concept of Democracy”.
Transformations of political assets in many Countries of the Southern part of Mediterranean as well as the system deep crisis of the Northern Mediterranean ones, pushed analysts and citizens to question on what a democratic system really represents and how reach a structured democracy. Young researchers from several Mediterranean Countries (the course registered presences from Italy, Lebanon, Egypt, Israel, Morocco, Greece, Spain) had been invited to discusse a paper on the concept of democracy in their own Countries.
A structured debate had developed on how Democracy seems to be the fulfillment of the deepest libertarian aspirations of humanity on a side as well it creates, on the other side, the problem of respect of an ethical system of values to be referred to, without which the meaning of democracy itself would lose sense giving up with its essential task.
Within the summer school programme IASEM also organized 3 workshops on specific subjects:
•Banks and Investments in the Mediterranean;
•Infrastructures in the Mediterranean;
•The Common Euro Mediterranean space.
Download Brochure 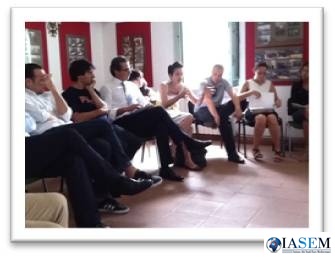 IASEM organized, in collaboration with the Konrad Adenauer Stiftung (KAS) and RFI-Rete Ferroviaria Italiana, the summer course in Euro-Mediterranean Strategy. The course was focused on the relevant themes of geopolitical, strategic and economic news affecting the Mediterranean and it was attended by students of various nationalities, from Iran, USA, Greece, Italy; there were internationally renowned experts and researchers, prof. Valeria Fiorani Piacentini, Director of CRISSMA, dr. Ettore Greco, Director of the IAI, dr. Elena Masteri, researcher at the Università Cattolica del Sacro Cuore, prof. Paolo Garonna, Director General of ANIA and Director of IASEM. The course ended with the final conference entitled “The Common Mediterranean home”, which was attended by, among others, the Vice-President of the European Parliament, On. Gianni Pittella, the Resposable of European area for the Italian Ministry of Foreign Affairs, Min. Plen. Cosimo Risi, the Chargé d’affaires of the Embassy of the Hashemite Kingdom of Jordan to Italy, dr. Firas Khouri, Director of KAS – Rome, dr.ssa Katja Plate, prof. Mohammad Jouili from The University of Manouba – Tunis.
Download Brochure 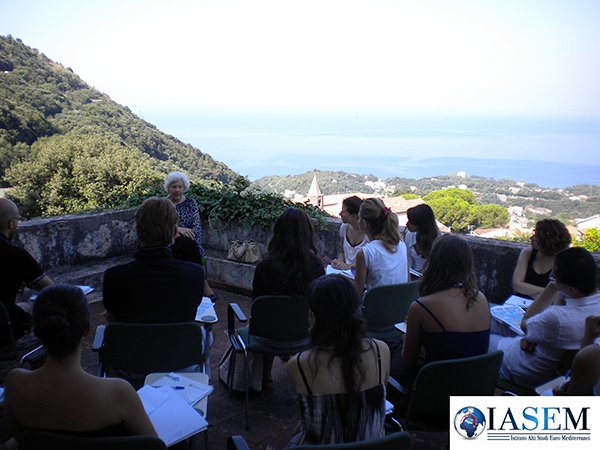